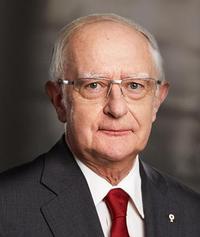 Lavery is pleased to announce that Mr. Gérard Coulombe, Q.C., a Business Law partner at Lavery, will receive the Lawyer Emeritus (Ad. E.) distinction from the Barreau du Québec during a ceremony that will be held on September 23, 2013 at the Montréal Science Centre.

Gérard Coulombe belongs to a short list of Lavery lawyers who have previously received this prestigious honorary distinction in recognition of an exceptional legal career. Called to the Barreau du Québec in 1969, Mr. Coulombe was, from 1972 to 1977, a special advisor to the Minister of Finance of Canada. This professional experience enabled him to develop thorough understanding of Canadian and international taxation.

In the last 35 years, Mr. Coulombe has carried on a general practice in business and commercial law where he represents more specifically financial institutions, Crown corporations and multinational companies. He sits on the boards of directors of several corporations, including National Bank of Canada, Cominar Real Estate Investment Trust and Club de hockey Canadien, Inc.

"Lavery is delighted that Gérard Coulombe is the recipient of the Lawyer Emeritus (Ad. E.) distinction. In a career that spans more than 40 years, Gérard has made a significant and multifold contribution to the legal profession: as a specialist in certain areas of practice, a skillful negotiator and dedicated mentor to young lawyers", said Don McCarty, Managing Partner of the firm.