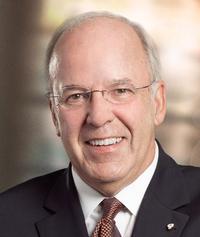 Lavery is pleased to announce that Mr. Jean Saint-Onge, Ad. E., a Litigation partner at Lavery, received the title of Fellow by the International Academy of Trial Lawyers (IATL), during a ceremony in Santa Barbara, California, on March 20, 2015.

The IATL is a prestigious group of elite trial lawyers from over 30 countries. Nominations of fellows are by invitation only and are highly selective, being based on accomplishment and excellence in litigation. Only 500 active members can have this title.

Mr. Saint-Onge practices at Lavery in commercial insurance, class actions, competition and antitrust, product liability as well as the distribution of financial products and services. He is regularly asked by clients to intervene in pending class action cases to assist in concluding a settlement and achieve a favourable outcome for all parties, most often in complex matters involving multiple defendants.

Mr. Saint-Onge has been involved in numerous precedent-setting cases and has represented major corporations in multijurisdictional and cross-border class actions, more particularly in the areas of competition law and consumer law. He is also a widely published author and a regular guest speaker.

Mr. Saint-Onge’s expertise and social commitment has been well recognized by his peers, whether it be through awards he has won, such as the 2003 Pro Bono Award, 2007 Mérite Award from the Quebec Bar and the 2007 Quebec Justice Prize, or his numerous nominations in prestigious legal directories, namely The Best Lawyers in Canada, The Canadian Legal Lexpert® Directory, Lexpert Guide to the Leading US/Canada Cross border Litigation Lawyers in Canada and Chambers Global.

"Lavery is delighted that Jean Saint-Onge is the recipient of this Fellowship. In a career that spans more than 30 years, Jean has made a significant contribution to the legal profession: as a specialist in certain areas of practice, a skillful negotiator and litigator or by his high level commitment to the community", said Don McCarty, Managing Partner of the firm.

To know more about this organization, visit the IATL website at:www.iatl.net.