Raphaël Schachter, master of ceremonies at the annual conference on human rights organized by the Lord Reading Law Society 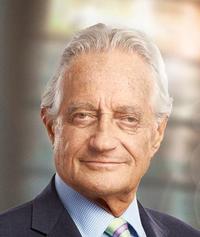 With over 600 attendees from the field of law and politics as well as important dignitaries, the dinner-meeting was an opportunity to pay tribute to the Honourable Irwin Cotler, former Minister of Justice and Attorney General of Canada, former MP for Mount Royal and spokesman of the Liberal Party of Canada in human rights, freedom and international justice.

Several leaders of the legal community delivered a heartfelt tribute to Mr. Cotler, including Ms. Justice Rosalie Abella of the Supreme Court who was accompanied by four of her colleagues, Judge Nicholas Kasirer of the Quebec Court of Appeal, as well as the well-known Professor Alan Dershowitz, Esq. from Harvard University. The success of the evening was crowned with a video presentation from the Prime Minister of Canada, Justin Trudeau, highlighting the passion, achievements and outstanding contribution of Mr. Cotler in the field of human rights.