Lavery, a sponsor of the Coupe Québec mountain bike competition in Sherbrooke

Lavery was a proud sponsor of the 3rd edition of the Coupe Québec mountain bike competition, which was held on June 25 and 26, 2016 in Sherbrooke's Mont Bellevue park. Organized by Club de vélo de montagne Dalbix, the event drew 360 participants for Saturday's Olympic cross-country (XCO) circuit and 320 for Sunday's classic cross-country circuit, stages 2 and 3 of the Coupe du Québec.

In addition to its sponsorship, Lavery’s involvement extended to having a team of volunteers in charge of the refuelling post at the foot of the mountain during stage 2. Lavery’s team included lawyers Audrey-Julie Dallaire and Marilyn Paré, notary Cynthia Fortin, paralegal Katy Pelletier and articling student Cynthia Coutu. Funds raised during the event will mainly be used to set up mountain bike trails on Mont Bellevue and will contribute to the mountain’s development. 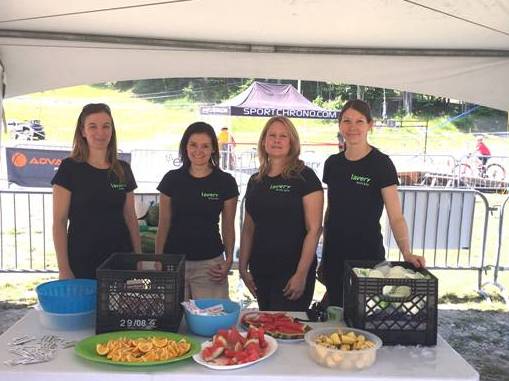