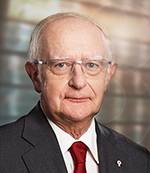 It is with profound sadness that Lavery announces the sudden passing of its partner, Me Gérard Coulombe, at the age of 68.

“Me Coulombe was known to all, and recognized by the stalwarts of the business world. His energy was equalled only by his competence and his passion for the profession, a passion that he shared with all those who had the privilege of crossing his path and reaping the benefits of his sage advice. Lavery has lost a partner, a mentor and a friend, and the entire business community of Québec is in mourning today”, stated Don McCarty, Managing Partner of Lavery.

In addition to the legal profession, which he practised for nearly five decades, Me Coulombe sat on many boards of directors, including, in particular, that of the National Bank of Canada for slightly over 20 years. At the time of his passing, he was still a director of Club de Hockey Canadien inc., National Bank Group Inc., National Bank Trust Inc., Casavant Frères, S.E.C., Fonds de solidarité FTQ and National Bank Funds Corporation. He was also a trustee of the Cominar Real Estate Investment Trust and had been appointed Lead Trustee of the Board of Trustees of this Fund in May 2016.

He was appointed Queen’s Counsel in 1992 and received the distinction of Lawyer Emeritus (Ad.E.) in 2013.

Over the span of a career that was as prolific as it was inspiring, Me Coulombe earned a more than enviable reputation in Québec and throughout Canada, where his name is synonymous with integrity, competence and hard work.

Me Coulombe hailed from the region of Vaudreuil-Soulanges , where he still lived.

Lavery sends its most sincere condolences to the family and friends of Me Coulombe, as well as to all the colleagues and partners who had the privilege of working alongside him.

An exemplary and inspiring professional career

In 1969, he headed for Oxford in England as a Rhodes Scholar for the Province of Québec, where he pursued graduate studies in administrative and tax law at Balliol College.

Upon returning to Canada in October 1971, he joined the Technical Interpretations Division of the National Revenue Department in Ottawa where he remained until June 1972, when he became Special Advisor for International Taxation Matters to the Department of Finance of Canada. In that capacity, he was responsible for negotiating agreements to avoid double taxation between Canada and more than forty countries, in addition to representing Canada on Working Party No. 1 of the Committee on Fiscal Affairs of the Organization for Economic Co-operation and Development (OECD) in Paris.

In March 1977, he joined the law firm of Desjardins Ducharme where he practised for some thirty years and chaired its Board of Directors from 2000 to 2007. In October 2007, he joined Lavery along with 34 other lawyers, and practised his profession tirelessly within this firm until the very end.

Recognition of his contributions

For many years, Me Coulombe has been listed in the Canadian Legal Directory published by Lexpert in the fields of corporate-commercial law and mergers and acquisitions, and he was also featured in the Best Lawyers in Canada directory in the field of business law (finance).

In October 2012, Lexpert magazine awarded him its Zenith Award, in recognition of his  exceptional contribution as a lawyer and agent of change for more than 40 years for his clients, his firm, businesses, law schools, the legal profession, his colleagues and the community. At the award ceremony, the following statement was made:

“Many industrial conglomerates that operate internationally must regularly thank Gérard Coulombe. Not only was he a leading corporate practitioner but he played a pivotal role in creating tax policy. As a special advisor to the Minister of Finance from 1972-1977, he was responsible for negotiating agreements that avoided double taxation between Canada and more than 40 countries.”

Me Coulombe was appointed Queen’s Counsel (Q.C.) in December 1992 and, in 2013, the Québec Bar awarded him the distinction of “Lawyer Emeritus” in recognition of an exceptional career that contributed to the influence of the legal profession.

A Partner of Québec Inc.

Me Coulombe, with his university education, his versatility and his experience, became closely associated for almost thirty years with the businesses making up Québec Inc. The various matters he was involved in led him to work throughout Canada and abroad, and to develop a unique practice that went beyond the strict confines of the legal profession.

Hence, in 1979, he represented the Government of Québec as part of the nationalization of asbestos-producing corporations. He was involved in the merger between the Provincial Bank of Canada and the Bank Canadian National at the beginning of the 1980s.

During the 1990s, he spearheaded the acquisition of the business of several trust companies by the National Bank of Canada, including General Trust of Canada and the sale of National Bank Leasing to GE Capital, which thereby established a significant foothold in Canada.

His professional activities continued throughout the 2000s, in particular in his capacity as Special Advisor to the Minister of Finance of Québec as part of the negotiation of the acquisition of Alcan by Rio Tinto. In 2009, he headed up the Lavery team that represented the consortium of Québec businesses that purchased the Montreal Canadiens.

All throughout his career, Me Coulombe remained interested in the international activities that he developed during the years he spent with the Department of Finance in Ottawa.

From 1989 to 2005, he was very active within the Lex Mundi Association, a worldwide leader among associations of independent law firms with a head office in Houston, Texas. Me Coulombe sat on the Board of Directors of this Association for many years and was its Chairman of the Board from 1993-1994. Lex Mundi has one member per jurisdiction and the law firm of Desjardins Ducharme was the member for Québec until 2007.

Finally, from 2008 until his passing, Me Coulombe acted as Honorary Consul for the Republic of Burkina Faso.

Involved in his community

He was a member of the Ethics Committee of the Barreau du Québec since 2003 and, in 1996, he sat on the Committee established by the Québec Bar with respect to the Securities Act.

Me Coulombe also devoted a great deal of his time to the field of the arts, primarily music, in particular as Chair of the Board of Directors of the I Musici Montreal Chamber Orchestra and Deputy Chair of the Canadian International Organ Competition for several years.