In 2013, the Autorité des marchés financiers (AMF) launched a consultation on equity crowdfunding, as we already discussed it in this publication last fall. Following this consultation, the AMF and the securities regulators of Saskatchewan, New Brunswick, Manitoba and Nova Scotia (the “Participating Jurisdictions”) published last March the Draft Regulation 45-108 respecting Crowdfunding (the “Draft Regulation”) and the Draft blanket order relating to the Start-up Crowdfunding Prospectus and Registration Exemption (the “Draft Exemption”). Some other Canadian jurisdictions published similar draft local notices.

Currently, in Canada, crowdfunding respecting the issuance of securities is not allowed. The Canadian Securities Administrators are aware of the increasing development of Internet-based fundraising and the fundraising needs of start-ups and SMEs. Participant Jurisdictions define crowdfunding as a method of funding a project or venture through small amounts of money raised from a potentially large number of people over the Internet via an Internet portal.

Many rules will apply to crowdfunding. The following table shows the most important of those: 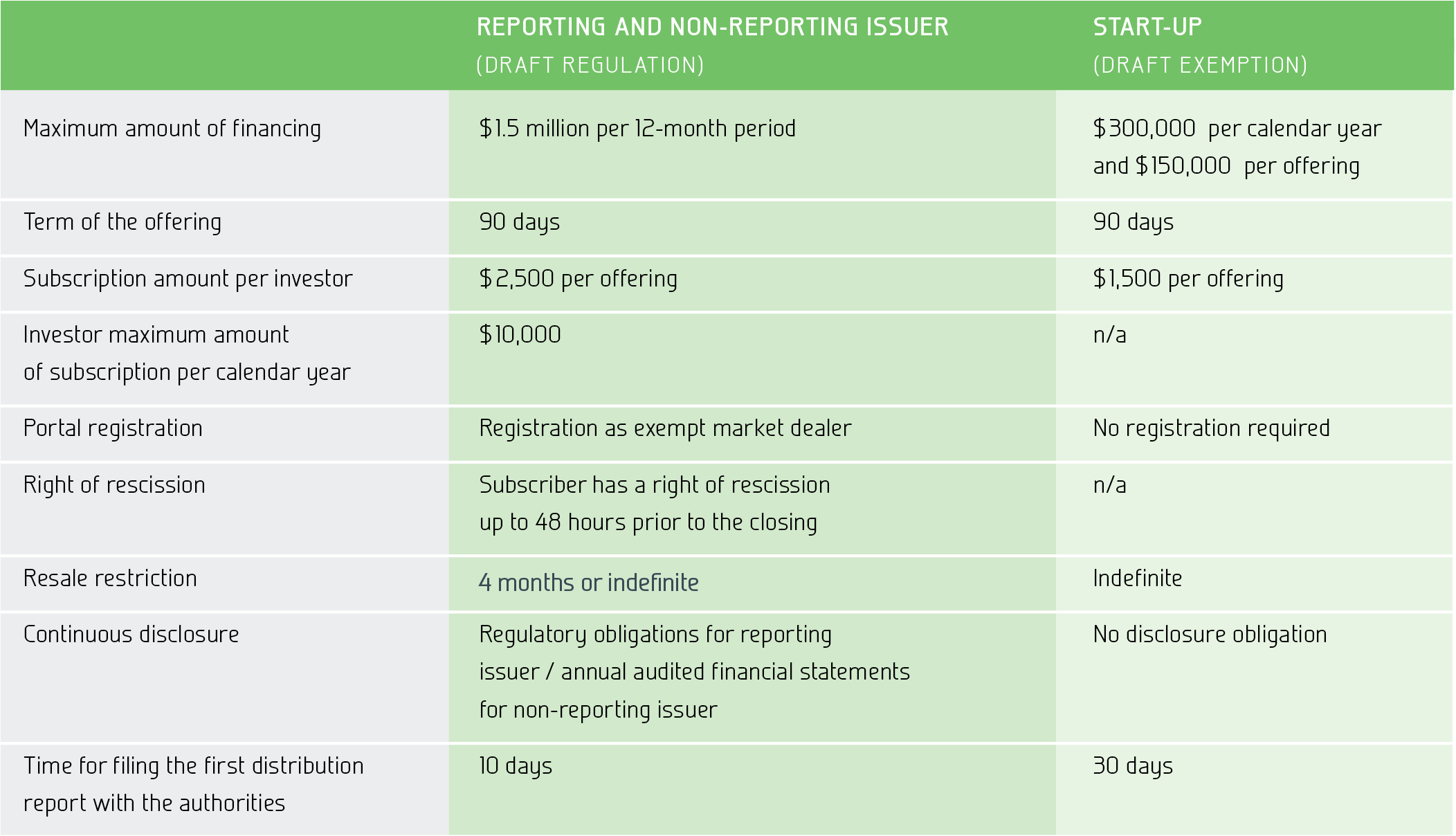 A streamlined disclosure document must be provided that includes basic information about the offering, the issuer and the portal. This document must also contain certain financial information. In the case of a start-up, it will rather be a standardized document (a form) without any obligation to provide financial statements. It must be noted that under Quebec securities regulations, such a document must be prepared either in French or in French and English, both for a Quebec issuer and an issuer from another jurisdiction which intends to distribute its securities to Quebec subscribers.

Reporting issuers who complete this type of financing will remain subject to the continuous disclosure obligations under securities legislation while non-reporting issuers will henceforth be required to provide, among other things, annual financial statements (audited or reviewed under the circumstances provided for in the Draft Regulation). Start-ups that will have distributed their securities under the Draft Exemption will have no ongoing disclosure obligation than that provided under their corporate governance statutes.

Funding portals which serve as intermediaries for the crowdfunding of non-reporting issuers and reporting issuers will be required to register as exempt market dealer. The funding portals of start-ups under the Draft Exemption will have no registration obligation but will be required to send to the Participating Jurisdictions information such as personal information on each of its promoters, directors, officers and each person participating in the control of the portal. A portal cannot provide specific recommendations or advice to investors about securities being offered on its platform. Portals will be required to ensure that the maximum investment thresholds per investor are complied with.

Issuers will not be allowed to pay compensation under any form whatsoever to a person other than the portal respecting the offering under the regime of this exemption. Such prohibition does not apply to the fees of lawyers and accountants who may help the issuer in drafting the offering documents.

Prior to allowing an issuer to access their websites, registered portals will also be required to conduct background checks on the issuer’s, directors, officers and promoters through the requirement to file a personal information form such as that required by the Canadian Securities Administrators for prospectuses or the Canadian exchanges.

This Draft Regulation will not apply to issuers of the real-estate sector who are not reporting issuers or to investment funds.

In conclusion, the intention of the Participating Jurisdictions to facilitate fundraising by some start-ups and SMEs is genuine. However, public protection requires a framework for this “new” financing method. It remains to be seen whether the industry will view the proposed framework as providing an adequate balance between regulatory requirements and compliance costs. The consultation period ends on June 18, 2014.

TRADEMARKS IN THE ENGLISH LANGUAGE ON PUBLIC SIGNS AND POSTERS
David Eramian
with the collaboration of Sylvie Demers, articling student

On April 9 last, the Superior Court of Québec issued its judgment1 on a motion for a declaratory judgment pertaining to trademarks in the English language on public signs and posters. The applicants, Magasin Best Buy Ltée2, Costco Wholesale Canada Ltd, Gap (Canada) Inc., Old Navy (Canada) Inc., Corporation Guess? Canada, la Compagnie Wal Mart du Canada, Toys “R” Us Canada Ltée and Curves International Inc. were seeking to have the Court answer the following question : [TRANSLATION] “are trademarks in the English language, without a registered French version, used on public signs and posters and in commercial advertising, required to be accompanied by a generic descriptive term in the French language to comply with the Charter of the French Language (“Charter”) and the Regulation respecting the language of commerce and business (“Regulation”)?” This motion for a declaratory judgment was made in the context of a recent change of policy of the Office de la langue française (“Office”) as to the interpretation of the Regulation, which was putting the applicants at risk of becoming the subject of penal proceedings and having their francization certificates withdrawn if they did not use their trademarks in the English language in conjunction with a generic descriptive term in the French language. The Attorney General of Québec was inviting the Court to answer the question in the affirmative.

The Superior Court answered the question in the negative, ruling in favour of the applicants. Firstly, the Court noted the distinction between the legal concepts of a business name and a trademark. The Court concluded that it was with full knowledge that the government had introduced a specific exception to the French language signage requirement to allow trademarks in other languages than French on public signs and posters. The scheme of the Act could not then be invoked to run against an exception created by the legislator with full knowledge.

Secondly, the Court noted that the Office had consistently applied section 25(4) of the Regulation since it came into force in 1993, allowing trademarks registered in languages other than French on public signs and posters without them being accompanied by generic terms. This interpretation was thus continuous and could be considered as an interpretative custom allowing the applicants to believe that their signage practices complied with the Charter. The interpretation proposed by the Attorney General would have resulted in depriving this derogation specifically provided for under section 25(4) of the Regulation of any practical application.

The Superior Court concluded by stating that it is not for the courts to modify clear legislative and regulatory texts supported by an interpretative custom which has been consistently applied for 20 years. It is rather for the legislator, if it so wishes, to intervene and impose the solutions it deems adequate as to the language to be used by businesses on public signs and posters.
________________________________
1 2014 QCCS 1427, par. 9.
2 This decision of the Superior Court was appealed, on May 8, 2014, by the Attorney General of Québec.