This event, which was held at the Lavery Conference Centre on March 14, drew about 100 people. The guest speaker was Mr. Eric Stevenson, Superintendent, Client Services and Distribution Oversight at the Autorité des marchés financiers (AMF), who gave the organization’s viewpoint on the challenges stemming from its mandate with respect to the new provisions included in An Act respecting contracting by Public Bodies, which lays the framework for companies contracting with a public body.

Mr. Nicolas Gagnon discussed the legal challenges arising from this act for the various stakeholders in the construction industry. Ms. Marie-Claude Cantin and Mr. Louis-Martin Dubé also gave a presentation on the Règlement visant à améliorer la sécurité dans le bâtiment [Regulation to enhance building safety]. They described the new public building safety measures that came into force on March 18, 2013 as well as the obligations of building owners and managers, designers and entrepreneurs under the new regulation. 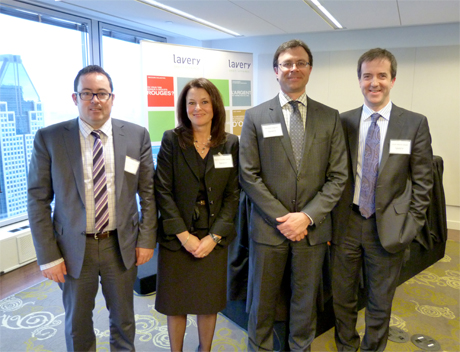