As a member of the administrative law team, Raymond Doray heads the information law practice and, more particularly, is involved in issues pertaining to access to information, privacy and defamation, as well as the application of the Canadian and Québec charters of rights and freedoms. He is also specialized in constitutional law.

Over the past few years, Mr. Doray has represented many public, private and media organizations before the courts in cases involving the confidentiality of documents, the validity of government decisions, as well as respect for reputation and privacy. In addition, he is legal counsel for a number of major corporations, professional orders, public bodies and media organizations in matters relating to administrative and constitutional law. He is regularly called upon to represent them in the courts when governmental decisions are challenged. He also represents various clients in proceedings pertaining to defamation, slander, invasion of privacy and professional confidentiality and has represented the Québec Bar in constitutional matters before the Court of Appeal and the Supreme Court of Canada.

Before joining the firm, he acted as legal advisor to the Paré Commission, a commission formed in 1980 to study the issue of access to government information, and then to the Conseil exécutif du Québec in 1982 and 1983, and to the Commission d'accès à l'information from 1984 to 1986.

In 1988, Mr. Doray published a book dealing with the legal and administrative aspects of access to information. Since 2002, he has written a treatise of more than 2,000 pages on rights of access to information and the protection of personal information that has been published by Éditions Yvon Blais/Thomson Reuters and is constantly updated. On June 1st, 2004, he was awarded the Québec Bar Foundation's Prix Répertoire for this treatise. He also writes and updates the chapters on professional confidentiality and conflicts of interest in a guide published by the Québec Bar school, of which he is the president. He is the author of numerous articles on these subjects published in trade journals, including commentaries on the law of e-commerce, right to privacy and protection of personal information, professional secrecy and ethics.

He is frequently invited to speak on the protection of personal information and privacy at conferences sponsored by professional agencies and business groups in Québec, elsewhere in Canada and abroad. 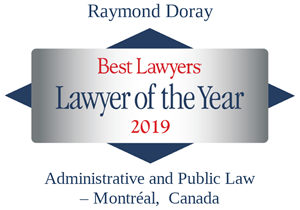